Posted on September 3, 2015 by truthearth

I have really been getting into spreading information about Orgone Energy lately and thought I might do a blog post about it. The FDA tried very very hard to make sure this information never saw the light of day again. That’s what makes it all the more exciting!

It was discovered by Dr. Wilhelm Reich in the 1930s and 40s and is simple another name for the energy that exists everywhere and connects all of us. Other names that you may have heard thrown around are Chi (Qi), Prana, Life Force, Source Field, etc. Back then the FDA made it illegal to say the word Orgone.

If you published a book that had that word in it, even one time, it would be found and destroyed. The Cabal tried very hard to discredit Dr. Reich and even went as far as ultimately throwing him in prison where he died in November of 1957 from a ‘heart attack’.

On the lighter side, he had quite an interesting hair style =P

He found that layering organic and inorganic materials would accumulate this energy and even went as far as bringing rain to the deserts. It was used to cure cancer and other diseases and even discovered that these little blue life forms he called ‘bions’ formed out of inorganic/inanimate material when they were super-heated.

It is apparent that clouds are an accumulation of this energy. Where there is an absence of POR (positive orgone) there is DOR (deadly orgone). Where there is DOR there is desert and the people in the area have a tendency to be very conservative and right-wing while areas with POR (areas with lush green vegitation, etc.) are more liberal and pro-human rights. There is a real correlation there.

He found that this technology can be used to manipulate the weather, for good and bad.
This is what those ‘cell phone’ towers are being used for. To pump out deadly Orgone.

Anyone with some creativity and determination can make and attenuate the effects of these towers by burying what is called a ‘towerbuster’ near the tower. It was discovered by Don Croft that using any type of metal shavings encased in resin with a crystal would transmute the DOR emitted from these towers and they would then begin to pump out POR. The cabal does not like this and will actually send people to find these TBs (towerbusters) and destroy them. Some people experience fly overs from unmarked black helicopters when they start making this stuff.

Interesting. Just now as I looked at my computer clock it said 11:11 pm. Go synchronicities!

Anywho! There is a forum where people make orgonite and report their results and post pictures. I will post the link at the end of this post along with other valuable resources so you can know more about this stuff.

From what I have gathered from the forum the towersbusters have a range of absorbing electro-pollution within 1/4 of a mile. So the bigger you build them, the better the range and more effect.

Here are some examples of Orgonite people make =]

You can do an ice test and the water will freeze the energy pattern emitted from the Orgonite: 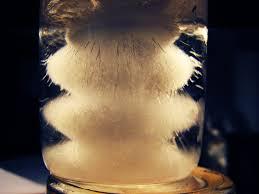 People report that their demeanor changes along with those around them when they are near Orgonite. Plants grow better around it:

And now some links!

Orgonite.info
Warrior Matrix Forum (Lots of useful information and facts and pictures there)
Orgone Crystals (A website where you can purchase quality Orgonite devices)
The American College of Orgonomy (Yes there is a college in New Jersey where you can learn more about Orgone)
Etheric Warriors (Don Croft’s website and forum with many stories of him and his wife being followed and targeted after spreading this information and ‘gifting’ many towers and places)

That’s all for now. I hope this helps someone in discovering the beauty of our universe and planet. There is so much we haven’t been told and when a full disclosure happens, we will finally be able to have our eyes opened to how truly amazing the universe is.