In addition to the amazing synchronicities I’ve experienced today I will begin slowly releasing those that have really been standing out front and center. This may or may not build up to something very special, or perhaps not at all. It will be up to each person to decide for themselves what to think. This includes dreams, situations and other synchronicities that have started since about 2 months ago as of the time of this writing.

I will reiterate a post that may become more important in the future which I highly recommend:

Today I decided to visit one of my favorite vegan restaurants. There was a car parked out front that had a triple 8 on the license plate:

One of the buses I saw drive by had a 6555 identification number on it and also a phone number consisting of all 2s. I am putting this together in real time right now and as I was putting the following photo together I noticed I screenshot it at 2:10, which in military time would have the numbers of my birthday, 14:10. I tried to sharpen the photo so you could see the 555 better but the bus was across the street so this was the best I could do:

In addition to this, I noticed that I took this photo at 1:08 pm and I used the View NX software which was software verison 2.10 (my birthday in military time appearing again) in addition to the 1936 (emphasis on the 3, 6, 9 appearing) pixel dimensions:

This next one is a big part of the whole grand slam. There are 3 synchronicities in one screenshot, with one that you will have to take my word for:

The first is the time which is 13:44 which is 1:44, another number with a lot of spiritual significance. Then this photo was number 210 out of 210. 210 in military time is 14:10 which is my birthday. This is followed by a cab with several 8s in the phone number. The one you will have to take my word for is that I will listening to Figure 8 by Ellie Goulding while taking this picture.

I would like to reiterate that the post ‘My Life is a Synchronicity’ was posted on 8/8, a number that I see very frequently, especially in the last couple of months.

I will provide some information about the numbers listed:

144 – number of Starseeds who came to this planet to assist in the liberation process, important in sacred geometry

410 (my birthday) – a number that appears frequently throughout history (among many other numbers) and everywhere down to the smallest detail of my life: (One of Q’s posts and the most recent version of the Q book)

I had a dream where I was shown a bible verse: John 4:4 – 4:10, I will reiterate here that I have no interest in any religion, however I do practice love, forgiveness and being service to others whenever possible and encourage others to do the same:

“4 Now he had to go through Samaria. 5 So he came to a town in Samaria called Sychar, near the plot of ground Jacob had given to his son Joseph.6 Jacob’s well was there, and Jesus, tired as he was from the journey, sat down by the well. It was about noon.

7 When a Samaritan woman came to draw water, Jesus said to her, “Will you give me a drink?” 8 (His disciples had gone into the town to buy food.)

10 Jesus answered her, “If you knew the gift of God and who it is that asks you for a drink, you would have asked him and he would have given you living water.”

722 – A number that frequently appears for me. 22 divided by 7 is the approximate value of Pi, which allegedly goes on forever, indicating a Universal influence, as the Universe itself is infinite.

(I planned on taking a roadtrip to the Four Corners Monument and decided to check out the details on Google Maps. A round trip from my exact location to there is 722 miles. 361+361):

As I was walking down the street I noticed a house with the address including 522 which in military time is 1722:

We received our assignment sheets at work at 7:22 AM a few times:

666 – This number is not inherently evil or associated with anything nefarious in its original intent. It is the fundamental number for many aspects of the Universe and it is a number that has been popping up much more lately:

Upon further research into 666 I found a lot of information that connects to Jesus and sacred geometry and the Sun. Synchronistically, the video which explains this is 11 minutes and 11 seconds long:

While driving a week or two back I was greeted with a license plate that read ‘jpc66’. JPC are my initials, Jonathan Patrick Carty, and the 6s seem to be part of the increased sightings of this number, especially recently: 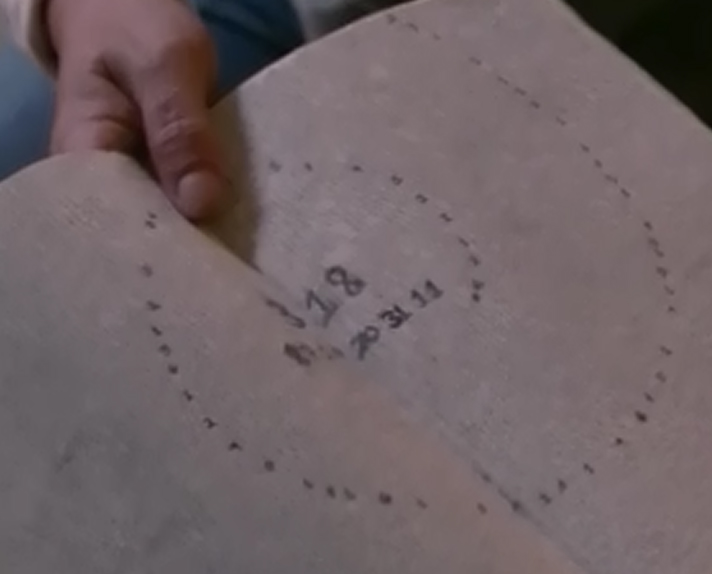 I recently rented a car to go to Flagstaff and much to my surprise I was endowed with a couple of amazing synchronistic numbers on the license plate:

I have taken many pictures of the clock after waking up suddenly and seeing a synchronistic number. 3:18 AM was one of them:

And just to prove that I didn’t just take this during the day with the lights off here are the details of the photo, interestingly, there are 72s appearing here! (The time says 2:58 because the clock in my room is off by about 20 minutes for whatever reason:

1000 – This is another number that has been appearing very frequently. This is one I didn’t understand as it didn’t appear to signal anything that I could grasp or look forward to or anything. Interestingly though, April 10th the 100th day of the year, which could be as close to 1000 as I could get if I was trying to communicate this number into my life.

Here is a snapshot of one I took one evening. I included the time stamp to prove that it was indeed the time it said, with the 20 minute difference:

While in Flagstaff this last couple weeks as of the time of this writing I was walking across the street and saw a Phoenix Ave sign with the ‘100’ street address number. I currently live in Phoenix:

I had parked to get something from the store the other day and was greeted with a 1000 in a phone number:

11:11 – This number is beyond amazing and is usually the first one to appear to people, after it is acknowledged more numbers with more information will be given:

While hiking the other day, about 20 minutes in, I noticed writing on these two metallic pillars that I hadn’t really paid any attention to before. They both had ‘Jesus is Lord’ several times in white. While walking closer to this I went to check the time and noticed it was 11:11:

Synchronistically, the photo number 0227 has 27 in it which is my current age, another number I see often. 227 backwards would also be 722, which I mentioned above. It was also photo number 136 in my iPod which is interesting because in the show Touch that I mentioned before (I have been meaning to write an analysis of this show, it has a lot of significant information in it!) they go on to talk about the ’36’. They say there is a group of people that came to this planet to correct imbalances and bring peace to this world. If we multiply 36 X 4 we get 144.

I would also like to add that I did some playing around with a gematria calculator and while some may believe you can manipulate numbers to anyone’s agenda I assure you I have no intention of deception, only honesty and transparency. I don’t do any of this for the fame or money or anything. I just want to see my mission on this planet through.

If we multiply 84 times 2, 4 times, we get 1,344 which would be military time for 1:44. I noticed 123 also appeared which is a number I get a lot also. I decided to just now randomly enter my initials with all of the gematria settings on and I got a sequences of 11s:

I also just looked down at the clock at noticed the time to be 4:10 PM:

I would also add that putting my great-great grandmother’s name (Grace Davis, who I have written about before as my own possible past incarnation) I found that the Trigonal Gematria value of her name is 720. Synchronistically, a video I made of her poetry had a length of 7:20, with 54 likes interestingly, if we add 54 plus 54 we get 108, today’s date:

This is everything I am being guided to include for now. There is much more, much of it happening as I type, but it needs to be spread out. I also need to process the information as it is a lot to take in sometimes. It can be overwhelming to see these things happen in real time and I always do my best to document them so I can share them with all of you. Plus I believe there is a bigger purpose for this information in the near future. Thank you to everyone who read this entire thing!! Much love!