Recently I’ve been guided to some pretty interesting information which may or may not have to do with the second coming. As usual I let you decide what to think.

(Elephant Journal) “Star Of Bethlehem” Visible for the First Time in 2,000 Years.

“Jupiter and Venus Dancing In The Sky Tonight: If you missed the “Star of Bethlehem” phenomenon last night it will still be possible to see this clear and spectacular display for the next few days as Jupiter and Venus dance in the night sky. The best time to view is just after dark, looking just above the horizon to the North/North-West.

‘Double star’ moment for Jupiter and Venus in the night sky (via CNN).

On June 30th, Jupiter and Venus merged into what is known as a super-star.

The conjunction of these two planets has been building throughout the month of June and the result will be a dazzling bright spectacular on June 30th.

Sky & Telescope suggest that a similar rare conjunction of Venus and Jupiter may have been what was known as the “Star of Bethlehem” in 3-2 BC and since then there has not been a brighter, closer planetary conjunction. That means that this is the first opportunity of seeing it so clear for 2,000 years!…”

The late hypnotherapist Dolores Cannon touched on this subject during one of her podcasts when she had a client who lived a past life as an Essene teacher at Qumran who taught Jesus. She said that this teacher, named Suddi, was present during the time of the first Star of Bethlehem and described it in the most amazing way. It was the night Jesus would be born. Jesus’ parents Joseph and Mary were both Essenes. They were carefully picked to have Jesus, who Suddi said was conceived in a normal human fashion, through sex. There is way more to this story and you can listen to it here if you feel guided.

But this seems to be another possible sign that the second coming could be real and might be a global event that humanity is being prepared for. It’s important to keep in mind that Jesus wasn’t just some historical biblical figure. The project of his incarnation and Ascension was a massive project involving countless parties both physically and multi-dimensionally (Extraterrestrials). Jesus was a starseed who was trying to teach the people how to empower themselves and realize all of the innate gifts they had. Then they wouldn’t be so easily controlled by the Cabal at the time (Roman Government/13 Bloodlines). This project was worked on by members of the Brotherhood of the Star, one of the main positive groups involved in shaping our world the way it is today:

Brotherhood of the Star was never public since the time of Atlantis. It was working secretly through its disciples.

They have caused the flowering of Graeco-Roman culture aided with telepathic impressions from Brotherhood of the Star. They were active as Druid priests in Celtic culture. As Essenes they were collaborating in the project of Ascension of Jesus and Magdalene/Grail family lineage as a counterbalance against the thirteenth bloodline of the black nobility…”

If you research this topic without bias as I have done, you will find that it is a much more exciting story than you will find in the bible or any other religious text. I am going to present some more interesting synchronicities here which I have recently been guided to as a result of this new Star of Bethlehem appearing.

But first I wanted to reiterate some information that some might know and some might not and that is the concept of cycles/spirals of time. Meaning that historical events have been shown to repeat themselves over and over using the same archetypes AKA the same type of personalities and even people with similar appearances to characters in the past.

So it would be reasonable to assume that the characters of the Bible are appearing once again to play their roles against the evil [insert government/organization/dictator/power structure here]. It was recently talked about that Corey Goode might be playing the role of Enoch once again, AKA the Messenger:

“..DW: As I said on the radio show with Jimmy Church, the term “Hanush” appears to be synonymous with “Enoch,” as in the Book of Enoch.

The exact Hebrew spelling is khanokh, or kn.n.kh, which translates as teacher, one who guides, and messenger.

The Book of Enoch is as old as the book of Genesis, and equally important. It describes a race of giants on Earth that became cannibalistic to humans.

These giants used Enoch to petition the benevolent Elohim for mercy, after they learned that a great flood was coming that would balance their karma.

They asked to be airlifted to safety and were denied.

Very interestingly, the Draco White Royal similarly used Corey to be released from our solar system before the upcoming solar flash — and was denied.

For this reason, I have speculated that “Enoch” is essentially a political term in the ET world that could also be akin to “Diplomat” or “Ambassador.”

In our present time, Corey appears to have been thrust into this role. It is not Messianic, nor should he be seen as anything special, just as with Carla, Jim, Don and myself.

Corey has had many difficulties and threats, and has had a very hard time adjusting to all the strange things that have been happening to him…”

David has also written about cycles of time on his blog and his books:

“…Using history, astrology, and synchronicity theory, author and researcher David Wilcock discussed how there is a hidden architecture played out in cycles, guiding humanity toward enlightenment and spiritual progress.

History repeats in precise cycles, he said, citing as an example the accurate prediction of French astrologer Michel Helmer in 1961 that the revolt Joan of Arc pulled off in the 1400s would repeat as a student-led revolution in France [in 1968], within a few days [of when it occurred in the previous cycle].

This 539-year cycle [is very close to one-quarter of an Age of the Zodiac, and] may have been referenced as a parable by Jesus, when he spoke of forgiving your brother “seven times 77 times,” he continued.

Wilcock also found parallels between Roman and American history, [including] the first Punic War to WWI, the second Punic War to WWII, Carthage to Germany, and Hannibal to Hitler.

[These cycles precisely repeat across a 2,160-year gap — the so-called “Age of the Zodiac.” Much of 20th century American history is holographically connected to Roman history in the Age of Aries.

Hannibal looks like “Hitler with a beard.” (See below.) They invaded the same areas, during the same six years, using the same basic strategies in each cycle.] 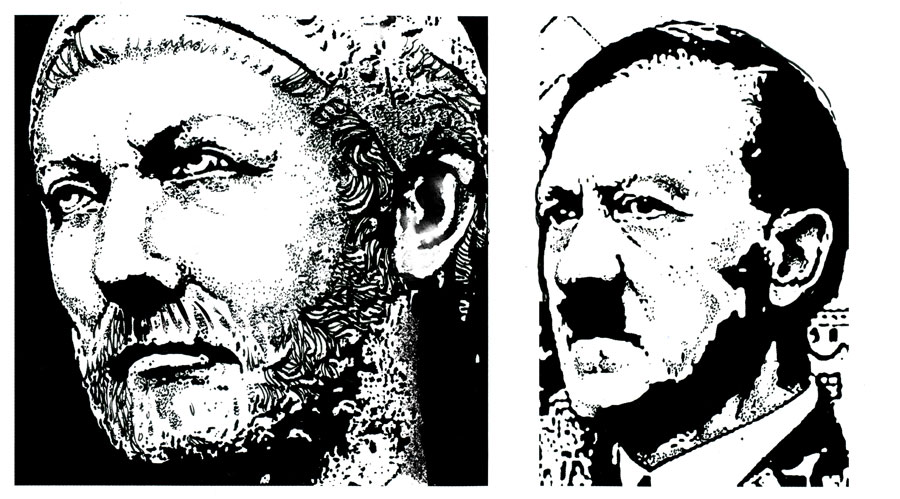 “Reality is not real. We’re in a hologram. There’s a story that’s repeating, and it keeps repeating until we master the lesson it’s teaching us,” he contended…”

Now to get back to these synchronicities, this Star of Bethlehem appeared at its maximum point on June 30th. It appears that this was no accident. June 30th is the 181st day of the year:

The prime number 181 has a special role within this particular set of synchronicities. With this number we can create the sixth hexagonal star number where one can make up a Star of David AKA Merkaba (geometric shape/emanation of the Universe/Source) using individual dots:

The gematria value of ‘Jesus the Messiah’ is 181:

We get the same value for Jesus’ original Aramaic name ‘Yeshuah ben Joseph’:

In Hebrew the gematria value of ‘believe’ (מאמינם) is 181:

In Greek the word for ‘peace’ (ειρήνη) has a gematria value of 181:

The gematria value of ‘End of Evil Forever’ is also 181:

Let us recall that this newest Star of Bethlehem appeared on June 30th (6/30). I have found other interesting gematria values for this number 630.

Interestingly, that word appears in Philippians 2:27, and we know 22 divided by 7 is how we get Pi. So here we see Pi appearing within these works yet again.

If we enter in the phrase ‘The Star of Bethlehem’ into the gematria calculator we find a connection to Pi and 410. Below we see this phrase has a value of 270:

270 is the gematria value for the Hebrew letters ‘INRI’ which means “Jesus of Nazareth, King of the Jews”:

“…the letters engraved above Christ when he was crucified were INRI (Which translates to; “Jesus of Nazareth, King of the Jews”). In Hebrew numerology or gematria, these 4 letters added up to 270.”

Some might recall a post where the ‘return of the Great Initiate’ [Jesus] was predicted by Edgar Cayce when discussing the prophetic knowledge contained within the architecture of the Great Pyramid created by Ra:

I have also found that an article about the Star of Bethlehem was published on Space.com on December 23rd. This was the date I had my QHHT session where I was shown to be Jesus, you can read more about that here if you feel guided. Still not 100% on board with that but I am guided to share it nonetheless:

1 Response to More Possible Signs About the Second Coming