Posted on November 4, 2019 by truthearth

So this won’t be a number-dense post like some of the other ones have been lately. There have been some interesting dreams manifesting which I will share here and some other synchronicities as well.

The first dream was about being at the Federal Reserve and getting away with some important documents they didn’t want getting out:

Mission at the Fed. So I dreamt about a mission to the Federal Reserve. I saw a group of older people dressed nicely and they were there for a meeting. I saw them go into a room.

These were very malevolent people. I think some of them wore red. It was Christmas time. I stole two important things from this location. I don’t know exactly what they were now, but I think they were documents or things they wouldn’t want exposed.

I remember making it out with these things and being next to a Christmas tree trying to read what I had. It looked like invoices; the pink, yellow and white papers.

I also remember I got a small clam shell cell phone from them. I went outside and tried to put it on silent as they were coming for me but a boy which I thought was my son was there and he threw a punch at me and then I woke up.

I considered the possibility that the appearance of the X-Mas tree was some kind of a prophetic time frame where some kind of ‘something’ would happen with the Federal Reserve around that time… We shall see of course, not putting any faith in dates…

The next dream was about being with the Star Trek crew and making preparations to leave. The time I finished writing this dream was 4:10:

And this interesting dream I just had this morning: 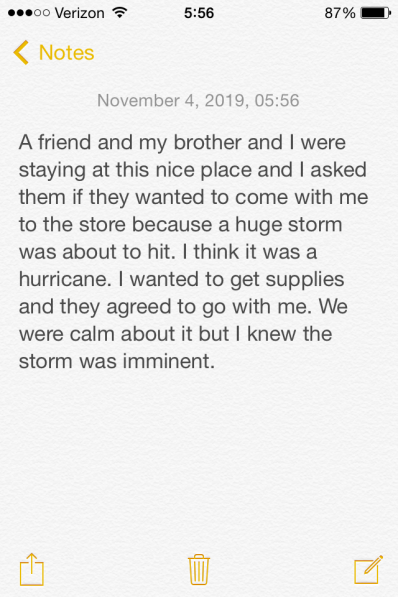 The time I wrote the above dream down was 5:56 AM and the word assigned to this number in Strong’s is ‘apelaunó‘ which means ‘to drive away’. This could mean that the Cabal is going to be driven away by a storm (Wave of Love, Liberation Operations).

The next few things are some possible information on receipts. The other day I tried to print out a label to ship an order of Orgonite internationally but the website wouldn’t work for me no matter how many times I tried. It said I had to go into the Post Office to get it figured out… *Deep sigh*. So I drive all the way there and the guy who works there said I could just do it online next time and I told him it wouldn’t work for me. And then he said he was using the same system the customers use to create labels. The same website that wouldn’t work for me was now working for him…

This happens sometimes when I am supposed to go somewhere ‘they’ need me to be in order to get a synchronicity to happen. ‘They’ have turned off my internet, stopped my car from starting, “lost” my car key, shut down debt card machines at gas stations just as I am about to pay (true story). So in this case, it appeared to be yet another Jesus synchronicity:

The above receipt is actually from November 1st and it was the morning so I don’t know why the date and time are incorrect there but the important thing appeared to be the receipt number = 416. This happens to be the gematria value of one of the ways to spell Jesus’ name in Hebrew (לישוע). That was the only thing I could find regarding that number: 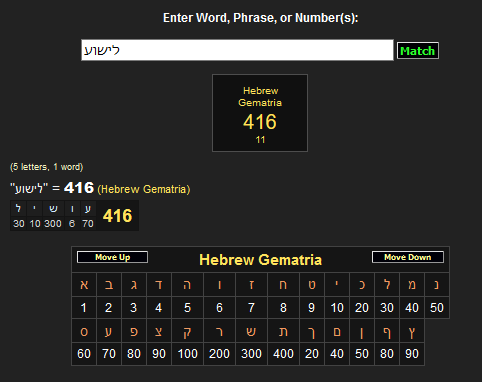 The next synchronicities are from today’s receipts from the store:

The transaction number is 9404 and the number 944 has appeared in big ways in previous reports. In this case I reversed it and looked up the word assigned to this number in Strong’s Concordance and found that it was ‘megar‘ which means ‘to overthrow’. This is an excellent synchronicity because the Light is currently overthrowing the Darkness.

And the checkout time was 9:46 and this is one of the main ‘sign post‘ numbers which appear to let me know the correct path is being taken.

The next receipt has an amazing synchronicity on it:

After being guided around the store to finally picking out some things in the clearance section I made my way to checkout stand 3 and started talking to the woman there who also happened to be Vegan! Another unicorn! Randomly meeting other Vegans is such a rarity it was a very amazing experience. And I think she wouldn’t have told me she was Vegan unless I had brought up one of the clearance items. She said she has been vegan for 30 years… I’m only 29…

Here is the amazing synchronicity in addition to that, the total cost was 6.19 and the word assigned to this number in Strong’s is ‘apolausis‘ which means ‘enjoyment’. That situation was absolutely an enjoyment and it’s amazing that the information on the receipt reflected that… That synchronicity wouldn’t have happened without the ‘higher ups’ guiding me to pick out certain products in order to get that total.

And the word assigned to this number in Strong’s is ‘Yerushalaim‘ (Jerusalem) which is possibly translated as ‘Foundation of Peace’ and we are indeed going to have a New Jerusalem on this planet after The Event.

Today while in town I gifted several pieces of Orgonite as I do sometimes. I document these trips on Warriormatrix.com for those who feel guided to read up on that. I post there as ‘dibspace’. There were a few towers which I placed Orgonite by (including one in very close proximity to a high school, the towers are generally placed where children are):

I was also able to create a flier and share it with the manager at a metaphysical store in town who was happy to post it there so hopefully a few more people will join in from that. You can find this flier on the post with information about the Silver Trigger Meditation and just below here:

PS The higher ups wanted this song to be posted for this article:

So it is the next day, November 5th, and I’ve checked today’s daily bible verse and found that the words ‘Heaven and Earth’ appear in the verse, just like the title of the above song: