I want to write an article about the dangers and consequences about the Fluoridation of our water supply.

First there is a misconception about it. We are told by our loving government, which is actually just a bunch of corporations, controlled by a small group of families, that fluoride is good for your teeth, and prevents cavities.

People don’t know much about fluoride, but they do know this mantra.

“If you tell a big enough lie and tell it frequently enough, it will be believed.”

First, what is fluoride? Did you know there are different types of fluoride?

There is a naturally occurring mineral called Calcium Fluoride. This is what I think people think is in their water:

This type of fluoride is not as toxic, however, it, and indeed, all types of fluoride, have no biological purpose in the human body.

There are three types of fluoride added to our water:

I couldn’t find many pictures of the above chemicals but I found a picture of a couple pills with the table of elements designation: 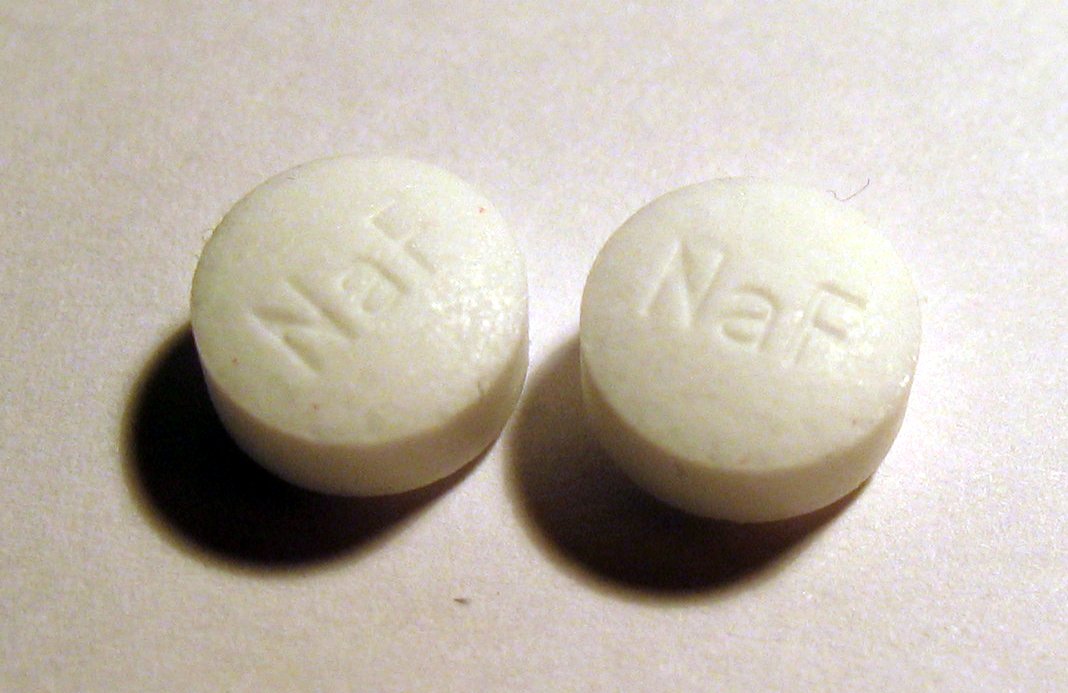 I also found a picture of a bag with a warning on it that indicates fluorides toxicity:

The fluoride that is added to our water is a by-product of the fertilizer industry:

Still think this is nonsense?

Harvard has classified fluoride as a neurotoxin:

“Fluoride seems to fit in with lead, mercury, and other poisons that cause chemical brain drain”

“The National Academy of Science reviews the scientific studies which have been performed on fluoride, and concludes:

It is apparent that fluorides have the ability to interfere with the functions of the brain and the body by direct and indirect means.”

These are prestigious organizations calling into question one of the most seemingly fundamental aspects of our society.

Dr. Dean Burk who was a head chemist at the National Cancer Institutes Cytochemistry Sector, part of the National Institute of Health under the U.S. Department of Health and Human Services, and who won the Hilderbrand Prize in 1952 for his work on photosynthesis, and the Gerhard Domagk Prize in 1965 for his development of procedures for distinguishing the difference between a normal cell and one damaged by cancer, went on to say and I quote:

“In point of fact, fluoride causes more human cancer deaths than any other chemical”

“Fluoride amounts to public murder on a grand scale.”

The gov’t has even lowered the levels of fluoride recently, possibly because of public pressure, who knows.

Now i’d like to really drive this article home with some critical thinking.

On a toothpaste tube that you can buy anywhere it says under “DRUG FACTS” (big point there, fluoride is a drug, if you want a prescription, like the pills you saw earlier, you need to go to a doctor, we are all being drugged against our will, that’s the first thing).

Now, here where I live, the concentration of fluoride is 0.70 mg/L. Almost the same as the amount listed on the toothpaste tube. You can check your city’s water fluoridation level at: (NOTE: this is only for the U.S.)

The problem here is that they can control the concentration, but they can’t control the dose. People are overdosing themselves with this known neurotoxin daily, in copious amounts.

Anything that has a base ingredient of water, probably has fluoride: soda, snacks, sauces etc.

The food in the area is grown with fluoridated water. The shower we take is spewing out loads of fluoride, which your skin absorbs. Don’t forget about pools.

It is also to be noted that chlorine and fluoride are two chemicals that should never be mixed together.

I have found some references to fluoride being used in concentration camps to make the prisoners more docile and obedient. I haven’t been able to find proof, however, is it such a stretch to believe that Nazi’s, who conducted horrible experiments on people, would use such a toxic chemical on its victims? I think not.

There are several lectures on YouTube that go into greater detail the negative health consequences of ingesting fluoride.

By the way, if fluoride is for your teeth, meaning it is only needed topically, why are we ingesting it?

I would also like to go into dental care before western medicine came to be.

How did people take care of their teeth back then? If our medicine is so great why didn’t everyone from hundreds of years ago lose all their teeth?

In my research I found that oil-pulling may have had something to do with our ancestor’s dental care regimen. It is a practice where you swish any type of oil (preferably coconut) in your mouth for 15-20 mins and spit it out. This apparently draws out toxins in the body and the mouth. I’ve found mouth health is directly related to heart health.

So my point is, fluoride is and has never been useful and there are other natural ways to prevent and even treat cavities.

Now how do we deal with this fluoride problem? We are getting it everywhere. I’ve found most shower filters don’t work well on fluoride. And the best way to get rid of it completely in the water is to get a reverse osmosis filtration system for your house, although this is expensive.

Water distilling is ideal, however the water will have no trace minerals left. One could add some pink Himalayan salt, this salt has 82 trace minerals that the body will make use of:

Unfortunately besides moving to a country where they are smart enough not to fluoridate the water supply, there isn’t much one could do about it once the water has been contaminated. The best thing would be for someone to be as healthy as possible to negate the side effects of it.

There is also another big consequence of fluoridation, the calcification of the Pineal gland. This gland is your third-eye (quite literally):

“Whats fascinating is that the interior of the Pineal gland actually has retinal tissue composed of rods and cones (photo-receptors) inside its interior lining just like the eye, and is even wired into the visual cortex in the brain. The photo-receptors of the retina strongly resemble the cells of the Pineal gland. Dr. David Klein, Science Daily. It even has vitreous fluid in it like an eye does.”

Now there are people who know how powerful the Pineal gland is, people who don’t want us to discover our real power. This could easily turn to another topic but I think I have written enough about this topic in this article.

So that’s what I have found in my research, fluoride is a very dangerous and toxic chemical that our children and we are consuming daily through various means I have described. The first step is to learn about these things, become aware of them, then we can do something about it.

Thanks for reading everyone and much love!