Just peeked in on Russia Today to see what was going on in the world from a real journalistic perspective and found this gem which I will share below. I have taken some of my family to vegan restaurants here and there and they were actually okay with the food. Times are a changin’!

A new study by the Good Food Institute (GFI), which represents the plant-based foods industry, found that sales of substitutes for animal products have exceeded $3.7 billion.

“The plant-based foods industry has gone from being a relatively niche market to fully mainstream,” said Michele Simon, Executive Director of the Plant Based Foods Association (PBFA). 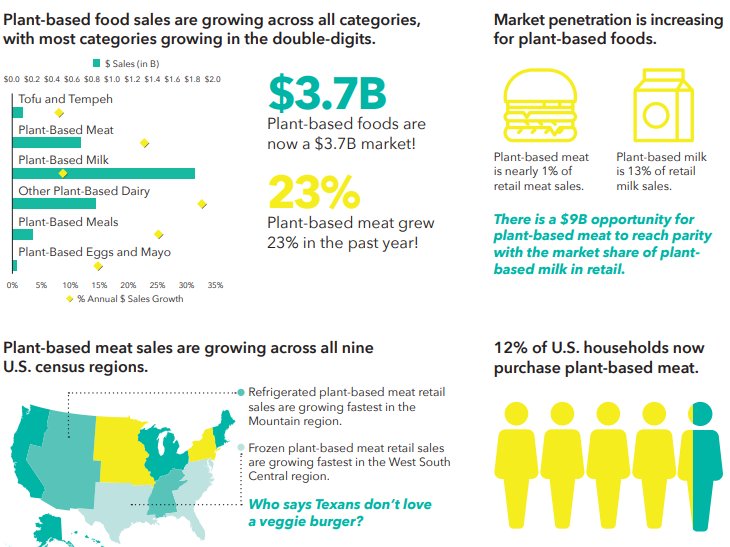 Simon explained that plant-based meat and dairy alternatives are now consumed not just by vegetarians but “even mainstream consumers” who are “enjoying these delicious and innovative options in the market today.”

GFI predicted that the global meat alternatives market is set to grow over the coming years, reaching $6.3 billion by 2023. It is currently valued at $4.63 billion.

“As consumers look to decrease their meat consumption, more and more people are choosing plant-based meat. In fact, 12 percent of households across the US now purchase plant-based meat,” said GFI Director of Corporate Engagement Alison Rabschnuk.

“[This is] a significant increase from last year and I expect we’ll see that trend continue,” Rabschnuk added.

Plant-based milk (a $1.8 billion market) commands a full 13 percent of total retail milk sales nationally. By contrast, it accounts for just about one percent of total US retail meat sales.

GFI noted that plant-based milk has become an increasingly common household staple and people are seeking out other plant-based dairy products. Those “other dairy alternatives” are seeing some of the greatest sales growth, according to GFI.

As the consciousness of the planet grows, so does its awareness of how horrific the meat and dairy industry practices are. Eventually it will be just like Commander Riker said on Star Trek:

Much love all! And for those vegans here who want a laugh, I highly recommend this video: