The reason why I am posing the title of this article as questions is because I don’t know 100% if what I’ve found is exactly what I am supposed to find. As always discernment is advised.

But regardless of whether or not these findings are accurate, they sure are interesting! So the first thing I will mention is the Jesus dream I had this morning as of the day of this writing. The context was a bit unusual but sometimes in dreams the context is irrelevant and only the numbers or words being communicated are necessary, almost as if they are being disguised by the surrounding scenery. This has been the case for previous dreams occasionally. They are pieces of a puzzle which must be put together later on in the waking state and documented here. It appears that every numerical detail of this dream is relevant as you will see:

I wasn’t sure if I had spelled the Jesusikus correctly, which I had mostly gotten a decent view of. The letters were huge against the wall which was also huge. Each of the letters were probably the height of an average human. There was no way to miss them.

So after researching this name Jesusikus for a while, with trying various ways of spelling what I thought I saw, I came up with almost nothing. Until I tried to get rid of some of the extra letters I had written down. I just plugged in ‘Jesusikus’ into Google and tried to see what would come up, if anything. At first I thought this was an old Latin or Greek spelling of the name as the theme of the restaurant seemed to be Mediterranean and almost Roman.

But literally the only thing I could find was this ‘Jesusikus’ as two separate words = ‘Jesus ikus’. And then I plugged this into Google Translate just to see what would happen and discovered that it is actually the Basque language and this translates to ‘See Jesus’:

In the Basque country they have a large statue of Jesus and this was one of the only things I could find based on surface-level of research regarding this connection: 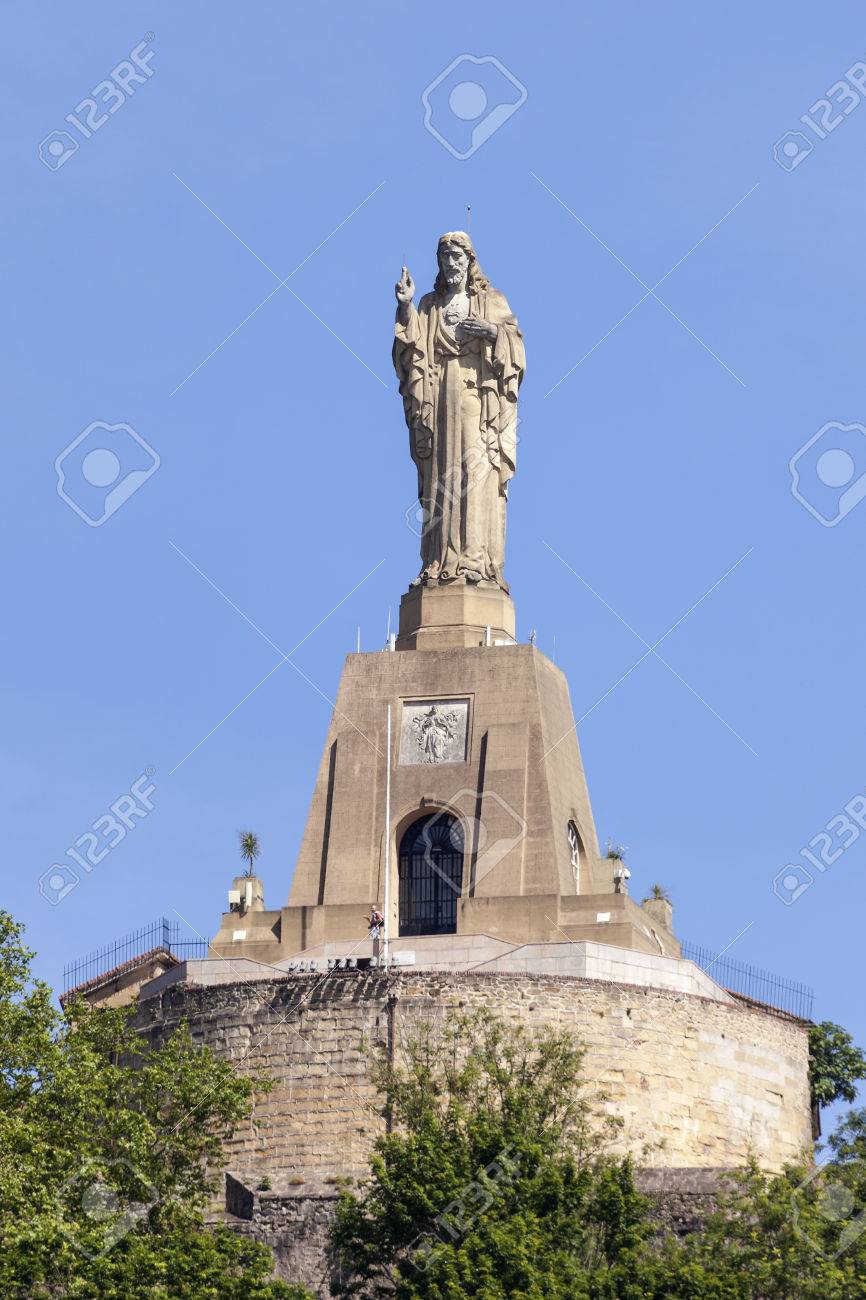 But it didn’t stop there. The gematria value of the words ‘See Jesus’ is 103:

And the gematria value of ‘Jesus’ is 515 in English:

When I plugged in today’s date 1/31 into Pi I found that 515 appears right after it in the string of numbers:

There was 38% battery life on my phone when I wrote this dream down and the word assigned to this number in Strong’s is ‘hagiasmos‘ which means ‘the process of making or becoming holy, set apart, sanctification, holiness, consecration.’ This word and definition seems to go along with the content of the dream.

The next possible prophetic dream coming true was one I had on January 11th, 2020. In the dream there was a strong impression of the Queen of Hearts which I found most unusual:

Huge weather storm related to following Jesus Synchronicities manifested. It was getting extremely intense just before waking up. I was in a car with some people I knew, I think there were numbers related to this but I don’t recall now. I think I saw the time 10:48 at some point.

I was traveling into another country and I wasn’t supposed to be there, then I think there was something having to do with the Queen of Hearts which was part of the storm. I think there were some things I was trying to take back with me but this wasn’t allowed.

The storm got so bad and windy and dusty the driver in the car couldn’t see. Queen of Hearts very important.

I posited that this may have been connected to a game I had just started playing called ‘Clock’ which put the Queen cards at the 12 o’ clock mark on a clock with the other numbers and suits following the same order. I thought this might indicate a synchronicity regarding the ‘Clock Striking the Hour’:

And now here is the possible additional prophetic portion of this dream. I watched the premiere of the new ‘Star Trek: Picard’ series and couldn’t believe my eyes when I saw the opening scene of Picard playing cards (Poker I believe) with Data and Data laying out a spread of five Queen of Hearts:

After several more seconds it is revealed that Picard is dreaming this card game with Data on board their ship and just before waking up there is an explosion on Mars which they see out the window.

So in my dream the Queen of Hearts were connected to a storm and in Picard’s dream he sees the spread of Queen of Hearts and then an explosion on Mars takes place. If this is a prophetic dream then it is truly one of the most amazing ones I’ve experienced so far!

I had the dream on January 11th and this premiere of Star Trek: Picard just aired January 23rd.

Very interestingly, the amount of time between these dates is 12 days:

And in the ‘Clock’ card game the Queen of Hearts is at the 12 o’ clock position which could be another sign of the ‘Clock Striking the Hour’ which has been a consistent synchronicity/theme over the past several months. Cobra has just posted the following meme which reads ‘IT HAS BEGUN’ in his most recent post:

Mars is known as the planet of war and the storm in my dream could be a reference to this war finally being over and the planet being liberated.

Let’s hope so because this old tire can’t be re-inflated over and over forever. If you feel guided you can watch the series premiere of Star Trek: Picard for free for a limited time on CBS’ YouTube channel:

I would also note that in the YouTube video I pulled that screenshot from Data lays out his Queen of Hearts spread at about the 2:05 mark and we know 205 is half of 410 so here we see the magic 410 appearing.

The gematria value of this message is 1025:

It would be a good idea to buckle up everyone and make sure you prepare as much as you can spiritually, mentally, emotionally and physically for The Event as it will probably be quite a doozy. We don’t know when it will happen of course but it’s important to be realistic and get as ready as you can.

The following song was just uploaded yesterday January 30th and seems to be a synchronicity related to the times we are in:

I am adding this next part later on. After experiencing another synchronicity I decided to add this other dream I had last night/this morning as of the time of this writing:

Dream about being a female witch who was part of an order of a larger body of organized witches I believe in the US.

I think I was with my family I have now when I was inside some building and I Had some kind of accident and died. It took a while to figure out I was dead but I caught on eventually.

I do remember at one point that I was with a so-called dear friend who I remembered was responsible for my murder on April 10th in the ’90s I think. I couldn’t believe it was her!

Then I remembered walking with her a while alive and her telling me that she was the government, as in negative witches like her and others were in positions of power and people didn’t know.

I remember when I was dead trying to stand in front of this creepy house and getting the worst feelings from it and it somehow was encroaching upon me even though it was a house.

I felt the same feeling with an SUV that was idling in traffic in front of me. Something terrible existed there and I thought it would attack me. Then I woke up.

I think at some point I was trying to hide and was spotted as being somewhat below in the level of what I thought I was. It was a number in feet but I forget what it was now. 439 or 239 feet I think.

What is very interesting is that the following song titled ‘White Witch’ was just uploaded a short while ago which is what prompted me to include the above dream in this article:

As far as the numbers in the dream, one of the only things I could find was that the gematria value of the Hebrew word ‘regel‘ (רגלו), which means ‘foot’, just like in the dream, is 239:

Perhaps this was just another example of following dream guidance as this leads to real world results in the waking state.