So this article/report will feature some more synchronicities and a dream which I was guided to write down this morning as of the time of this writing.

I will share a dream from this morning which was unusual but involved some torture which was unpleasant. Lately my dreams have been very heavy emotionally which carries over after I wake up. Some days I would wake up feeling so tired and exhausted it felt like I had been hit by a truck! But we know the war is being fought on every front, including the Astral Plane. As with many dreams, the Higher Ups kept giving me the energy to write this one down and kept it constant in my mind until I did so:

Dream about being captured in the Middle East. I dreamt that I was with a couple of friends and we were hiding in a house. I think it was Israel. The home was modern and cozy.

Then came the soldiers, there were a few of them; 2 male and 1 female. The leader was insane and reminded me of a character from Ender’s Game.

So my friends hid somewhere outside I think near the home’s patio and there wasn’t enough room for me so they told me there was a small compartment door which opened in front of the toilet.

I was frantically trying to find this door and finally found it but one of the pieces which held it in place came loose and I wouldn’t close it properly. I could be found…

So then I hear the crazy soldier came closer, open the door and I couldn’t scurry away farther inside of this hidden area and he alerted the other soldiers that I was there.

I rushed and crawled through the compartment which led to the living room and I jumped the patio wall. I remember thinking for a split second that I should tell them I am the son of god and then kept running until I tried to go into a large building but the door had just closed moments before I got there.

The soldiers captured me and immediately began electroshocking me. They placed a cup on my left chest area and began the shocks, then they did the right side and sustained the shock for several seconds while I screamed as loud as possible in pain.

The first shock hurt quite a bit and then the second sustained one wasn’t as bad, but I didn’t want them to know that or they would likely intensify it.

I think perhaps I was beginning to dissociate from the pain. They took great pleasure in this capture and torture.

So yesterday I was guided to go to town and to bring several pieces of orgonite with me. The first place I was guided to stop at was the Salvation Army Thrift Store. After going inside I was just guided to stop at the very front of the store and check out this newsletter they did and on the front cover was some very encouraging news for LGBTQ people. I was strongly guided to get a picture of this:

After taking that photo I was guided to leave, the only reason for being there was to get the above photo.

After that I stopped at the library to drop off a couple of books and was guided to take several pieces of the orgonite I brought with me inside. After leaving a couple of pieces in various places I was guided to the religious book section and they energetically directed me to a specific point in the section. When I looked down a shelf I saw that I was standing right in front of two books about the Knights Templar. I was guided to place a piece of orgonite on one of the books:

After that I left several more pieces around the library and was not guided to checkout or buy any books this time. After that I was guided to head to the store to get groceries.

So this was quite an interesting trip to the store, as they usually are. I had to check my food stamps balance so I knew how much was available. What was kind of funny was that I was counting the cost of everything as I was going along but two times I was guided to stop what I was doing and look into the cart and I realized ‘they’ wanted me to recount the cost of everything. I was off by a dollar both times! They wanted to make sure I had exactly enough for all of it.

So then it was time to checkout and I got a couple of receipts this time as I bought a couple of things for a nice elderly couple there who were homeless.

Very interestingly, if we plug the above transaction number, 9991, into Pi we see it takes position behind 401 in the string of numbers, which was the checkout time on the below receipt:

After playing around with these numbers I found that subtracting one transaction number from the other one resulted in 277:

I was strongly guided to look further into this number than what I already knew about it and found that it was the gematria value of the word ‘Cherubims‘ (הכרבים) in Hebrew:

Cherubims are an order of Angels who directly attend to God: 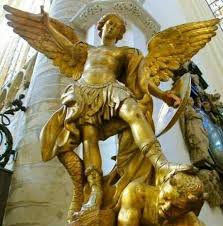 So does this mean these beings made their presence known through these synchronicities? Anything is possible!

If we plug this into Pi we see it takes position right behind 277:

And we know the gematria value of ‘Jesus Christ’ is 59:

Amazingly, after leaving the store, there was a car parked in front of me which had ‘Starseed’ on the passenger dashboard:

After that I left the various pieces on tables outside of restaurants and decided to head back home.

When I got back home one of my relatives pointed out that there was a beautiful rainbow which was amazingly very close to us. This appeared to be a positive sign and that there would be a rainbow at the end of this storm we are all in:

If we multiply the digits of this post number together we get 360:

There are 360 degrees in a circle and a circle is how we derive Pi and today happens to be Pi Day!

The appearance of Pi in these works hints at the presence of God/Source since Pi can be calculated infinitely just like what God/Source is, eternal.

PS Below is a video I was just guided to make yesterday which features some headlines about current events with the stock market crashes and Coronavirus effects on the global society, in addition to information that people might be interested in to help them prepare for The Event.