So today I went to town to get a few things and drop off the recyclables and as I was getting ready to get dressed I got the emotion of ‘ALL WHITE’, telling me to wear an all-white outfit. And I said “oh like my shorts and other ‘mostly’ white shirt?” and then I got the emotion of ‘FULL PURE WHITE OUTFIT’, as in the clothes I got at Goodwill several weeks ago and wore to town not long ago. Some might recall that ‘they’ guided me to wash this outfit a few days ago and when that happened I knew it wouldn’t be long before I would have to wear it again. And today was the day. When ‘they’ have me wear all-white that is an indication that BIG synchronicities are going to be happening.

So I kinda had my little plan figured out, like where I would stop first but ‘they’ directed me on the path that was already figured out which was to go and get some gas. The check out time on the receipt is 12:28 (I got gas on pump 4 and this individual number has been appearing a lot recently):

After that I went right to the grocery store and while there I was guided to snap a photo:

After doing some research I found some interesting information on the receipt (I ended up checking out at the 4th check out stand):

1399 just appeared recently. 1399 is the 222nd prime number and when plugged into Pi the digits of Pi appear in the position number:

And the gematria value of ‘Victory of the Light’ is 222:

After that I needed to go to the hardware store and try to find a silver cap for a hose bib because the seal inside was corroded. And while I was walking up to the entrance there was a Jeep full of people and kids that were also just pulling up and I heard some of the young girls saying “Jesus!” loudly. And I just smiled at them and continued on.

The store didn’t have the part so I’m guessing that this visit was just for the experience of encountering those girls. EVERYTHING for a reason.

So then it was time to visit the library because it’s just a great place to be. And I was guided to go and look at the books on numerology and mathematics since that has been a big part of these synchronicities so far and there was a book that stood out called ‘How To Count Like An Egyptian’:

The library book number ended with the digits 6659 and this was quite shocking since this number has been appearing in the biggest ways recently including in a dream from just a day or two ago.

Of course there was a passage in that book about Pi:

And on my way out I noticed the time was 1:44 on the TV screens they have there on the walls by the elevators:

So after leaving the library I was guided to head back towards home and then the emotion of ‘TURN’ manifested and I turned down a road where there was a thrift store (although it was closed because it’s Sunday). Then I got the emotion of ‘PICTURE, MAILBOXES’ and so I did just that:

So after subtracting these numbers from one another = 603 – 237 (both synchronistic numbers that have appeared in these works) we get 366:

Then I was guided to go the store and get a couple of things. But when I first pulled into the parking lot I got the emotion of ‘WAIT’. Okay…so I sit there and ‘they’ are holding this emotion in my body so that I know not to move from that spot.

After a few minutes I remembered something else I needed from the store. Then the emotion went away and then I went inside. I think ‘they’ were helping me remember…Lol.

EVERYTHING for a reason. Including waiting.

The total was 2.52 and this number just appeared in a big way recently as well. 252 is the gematria value of the following words and phrases: ‘The Second Coming of Christ’, ‘Christ Consciousness’, ‘All Truth Will Be Known’, ‘Jesus Returns Soon’, ‘Jesus Christ Sun of God’, ‘Love Without Limits’, ‘God Will Never Leave You’, ‘The Golden Age’, ‘Bless’ (יברכך) (literally ‘Bless You’), ‘Blessed’ (μακαριοι), ‘Brilliant’ (λαμπρα) (referring to light) and ‘Light’ (המאור).

And while driving up to the store I was guided to get a picture of one of the numbers on the electrical poles = 1297:

The gematria value of ‘The Jesus Synchronicities‘ which is what I have been guided to call this collection of information is 297. 297 appeared in the mail box in a photo earlier in this article as well. 1297 is the 211th prime number. And the 1297th prime number is 10631 and these are the digits of my old apartment number address = 13610.

And ‘they’ really wanted to drive this day full of synchronicities home with a slam dunk. While driving back home I suddenly got the emotion to turn into a small motel parking lot which I missed because I wasn’t sure why they would want me to do that.

So I said ‘okay, turning around’! So I turn around and then turn around again because I missed it again and wasn’t sure exactly where they wanted me to go. So I drove carefully and they gave me the emotion of ‘TURN’ when it was time to turn. And I said okay guys what is the point of this? There’s nothing here to see!

Then I park somewhere and look up and see that I had parked in front of the motel room number 33. And then I laughed and said wow! (33 = number of years Jesus lived):

And then I was finally guided to go home.

Now I will be sharing some other gematria values and numbers that had manifested in the last day or so.

If we add the digits of this post number together we get 28:

If we multiply the digits of this post number together we get 2688:

268 is the gematria value of the following words and phrases: ‘Return of Jesus Christ’, ‘I Am Alpha and Omega’, ‘Behold I Am Coming’, 268 spelled out ‘Two Hundred Sixty Eight’ and ‘The Source of Everything’.

And we know 288 in Pi takes position 33, the amount of years Jesus allegedly lived:

There is some interesting information to be extracted from today’s date, March 10th or 3/10.

If we see the date in day/month format it would be 10/3 and 103 has a lot of good gematria values attached to it. 103 is the gematria value of the following words and phrases: ‘The Glory of Jesus Christ’, ‘The Liberation of Earth’, ‘The Magic Number Four Ten’, ‘The Golden Age’, ‘A Light Body’, ‘Angel’/’An Angel’ (במלאכי), ‘The Stars’ (הכוכבים), ‘Love You’ (αγαπηι), ‘Transformation into a Light Body’, ‘The End of Darkness Forever’, and finally ‘Do You Believe in Coincidences?’.

If we plug the date in day/month/year format into Pi we see it appears after 308 and before 358:

The 308th day of the year is November 4th and this was the date the largest solar flare ever recorded took place and 358 is the gematria value of ‘Messiah’ (משיח) in Hebrew.

And interestingly there was a 2nd coronal mass ejection from the Sun today:

And we know the time the meaning of the number 410 on the Angel’s Numbers website was posted was done at 3:10:

If we plug 441 into the base-10/base-7 (instead of base-8) we get 1200 which could be seen as the clock striking the hour, which has been a synchronicity that has been appearing a lot recently:

The number 395 has been appearing more recently. 395 is the gematria value of ‘God’s Name is Pi’ and ‘The Reincarnation of Lord Jesus Christ’ (which is 33 letters):

If we plug 203 (another number which appears occasionally) into the converter we get 410:

1237 is the gematria value of ‘Pythagoras’ (numbers wizard and founder of Western philosophy), ‘Fire From the Circle’ and ‘Samvartaka Fire’ (another name for the solar flash).

Today’s daily bible verse has some interesting information as well:

The gematria values of this verse are 618 and 215 (same as the check out time on one of the receipts from earlier):

And finally I wanted to share a dream or series of dreams that someone had which was showing them the Second Coming of Jesus through symbols. This dream took place on September 22nd and this is significant because it is the opposite of the date of April 10th (my birthday):

The description and photo cover for the bird in the above video resembled a photo that was shared in another video titled ‘Biblical Events are Happening Worldwide!‘. Apparently someone had photographed a huge Phoenix during a Northern Lights event here in the United States last month in February: 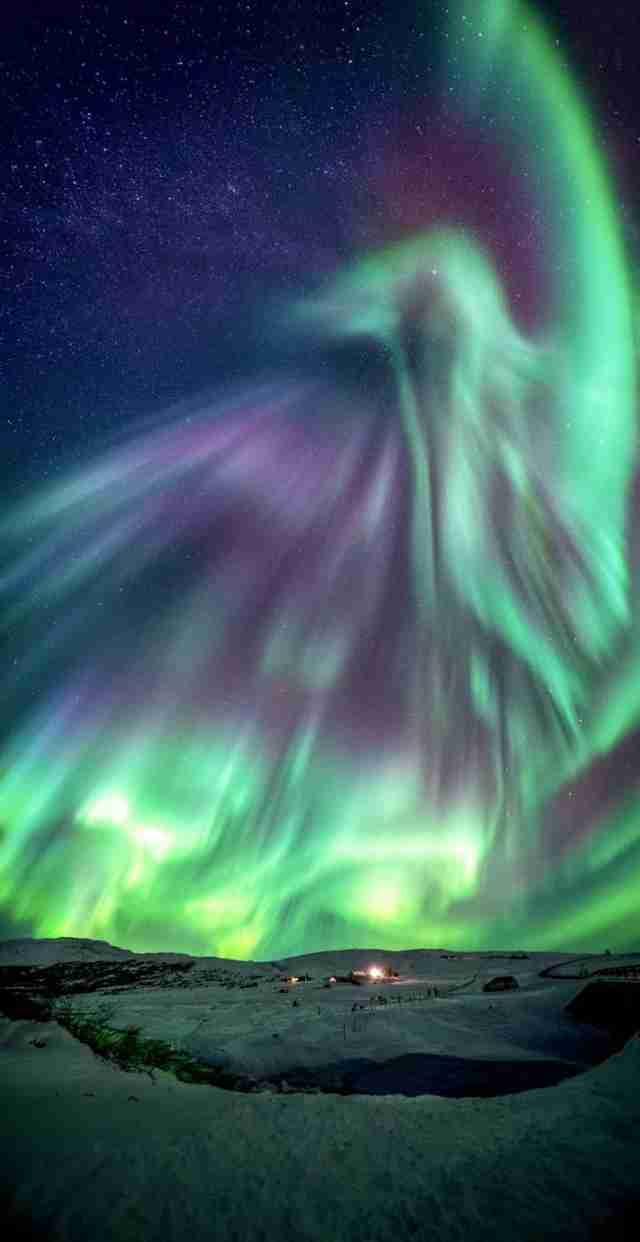 Phoenix synchronicities have been appearing a lot recently too in the form of gematria values. One example is the phrase ‘The Rising of the Holy Phoenix’ which has a gematria value of 314 (Pi):