This post will be more of a personal nature but others are, of course, welcome to read it nonetheless. I experience synchronicity constantly throughout the day. But there was one grand synchronicity that has left me in awe and sometimes in total mental paralysis, in a good way.

It started when I began binge-watching Doctor Who. This is one of those shows that discloses a ton of information from the military and other places about the nature of the Universe and other likely classified topics and technology.

The Doctor is a character that is an extra-terrestrial time traveler that uses his T.A.R.D.I.S. (Time And Relative Dimension in Space) space ship to traverse the cosmos and all the dimensions.

Throughout season 1 various scenes depicted ‘Bad Wolf’ which was written into every episode in various ways:

Here is a synopsis of the entire situation:

“After looking into the Heart of the TARDIS, the Time Vortex itself filled Rose Tyler, who then temporarily became the Bad Wolf entity. She scattered the two words throughout time as a sign to herself that she was linked to the Doctor, creating a looped ontological paradox.”

“While possessed of these gifts, the entity set out to spread the Bad Wolf meme through many worlds and times. In this way, the Ninth Doctor and Rose’s past selves would eventually follow the clues that would enable them to defeat the Daleks, creating an ontological paradox in the process. The Bad Wolf destroyed the Dalek fleet and all the Daleks on Satellite Five, including the Dalek Emperor.” 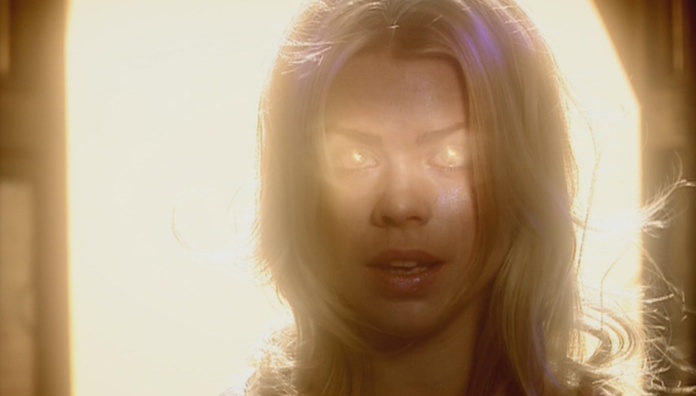 Rose Tyler in Doctor Who

After seeing this final episode I immediately began to remember certain dreams and situations I had throughout my life that were ‘Wolf’-related. I spent the next hour in total mental disarray and amazement when I remembered the following:

As I am writing this I am experiencing a synchronicity of seeing 4:10 on the clock and 4/10 is my birthday, and if we add up the numbers of the date today it would be 3, 6, 9 which is another synchronicity that I experience frequently.

The above screenshot is one of the scenes where I first noticed the Wolf on his shirt. Now as I mentioned before I saw this episode right after finishing Doctor Who, so I was even more blown-away after I saw this guys’ t-shirt.

Now I will list some of the Wolf-related things I’ve seen since having this incredible synchronicity:

“This web is referred to as “Indra’s Net” because Indra is the Lord of Time (just like in Doctor Who, who is a Time Lord)  who catches all things in his cosmic net.  When synchronicity occurs, invisible bonds appear visible.”

(The person that wrote this blog post also has a connection to the Wolf spirit animal:)

“Feb 4, 2015.    Yesterday morning I got to thinking about how much I love my animal totem, Gray Wolf, and how he has helped me and guided me and protected me for so many years.”

I noticed on the front page cover of my piano music book there is a piece listed and the title is Peter and the Wolf, I have had this book for at least 7-8 years:

I began asking out loud, “what do I do now? What do I do with this information? It is just for show? Did I do this? Tell me what to do! Was this a reminder in case I didn’t awaken to my mission here? Was it a confirmation?”

I have studied how time works through various sources and have learned a lot, especially from Doctor Who. I’ve found the same information over and over again;

I will continue to carry out my mission here and add to this post, but the most significant things are described here. I don’t know if anyone will care about reading this or even believe me but I feel guided to share this as someone else may have experienced the same thing, and in the off-chance that you have i’d like to hear about it!

10 Responses to The Wolf Synchronicity