This post will be featuring some interesting connections made with the amazing marriage of numerology, synchronicity and gematria. I’ve found that all of these three things combined make for a powerful tool to uncover previously undiscovered connections to things that may or may not have gone unnoticed. ‘They’ have guided me to do this today, on Pi day 3.14, because we will be using Pi and its seemingly infinite amount of possibilities for information.

What I’ve found is that many of the numbers ‘they’ are giving me are numbers that are found in the most recent calculation of Pi and not Ancient Pi which was calculated by dividing 22 by 7. Some of these numbers make no sense until they are used in combination with the three subjects I mentioned above: gematria, synchronicity and numerology, the results of which can be found in Pi.

First I would like to share some dreams I have been having about The Event, both recently and in the past to hopefully uplift people at this time in the absence of intel per Cobra’s post. Of course these are dreams and dreams aren’t always a reliable source of information. However, in this case I think it’s possible that they might be. Discernment advised here.

“Had dream here space craft have been or are currently being made for people to obtain, along with free energy devices. The ships looked like they would be transportation for at least 2 people. We were working in a huge manufacturing facility. We were testing food safety and logistics of how to distribute them and how to introduce them to the public.

It almost seemed old as I’m sure this has already been going on. I remember saying to myself, is this really happening? Yes another worker told me. There were issues, like food storage and energy requirements and space needed to complete construction of the vehicles. There were 5-6 designated spaces that were used to experiment with the various aspects of this operation, as I mentioned above.

There were as least a dozen workers there all working as hard as they could to get this done. Each ship doesn’t take that long to make. They look like the Jetson’s craft, the family-sized one. I woke up at a synchronistic time on the clock.”

“Dream about being at a Scottsdale dinner with family. They presented a show about a ‘Wave’. They use the Sanskrit word ‘Vimana‘ on a sign outside the main sitting area (the Vimanas are anti-gravitic craft built in ancient India) except they only spelled it with consonants and no vowels. They wrote ‘Wave’ on their projection presentation screen and two downward strokes of what appeared to be Japanese ink underneath the word (Below is exactly what I saw):

(Interestingly, the below photo is the Japanese character for ‘Wave’. Notice the two strokes on the left side which is what I saw in the dream per the above picture:)

Then I had to go to the bathroom and went into stall number 39. In the lobby I helped an older man put his shoes on and walked him back to his table. I couldn’t help but wonder how many of these rich people were abusing children. On the way there we drove by a house that was pyramid-shaped.”

Now the number 39 is important because I had got this number while entering various phrases into the gematria calculator a few days ago: 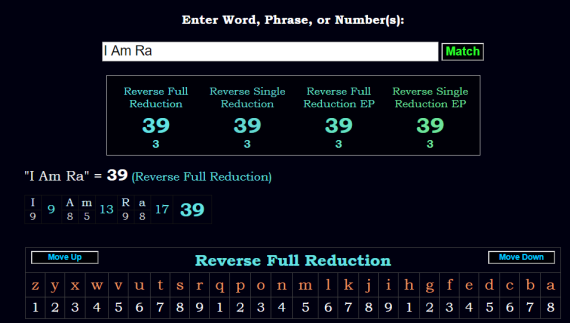 Upon adding the word ‘Wave’ into the gematria calculator I was greeted with some more 39s in a few different ciphers:

Ra has come up several times throughout this exploration of numbers and gematria: 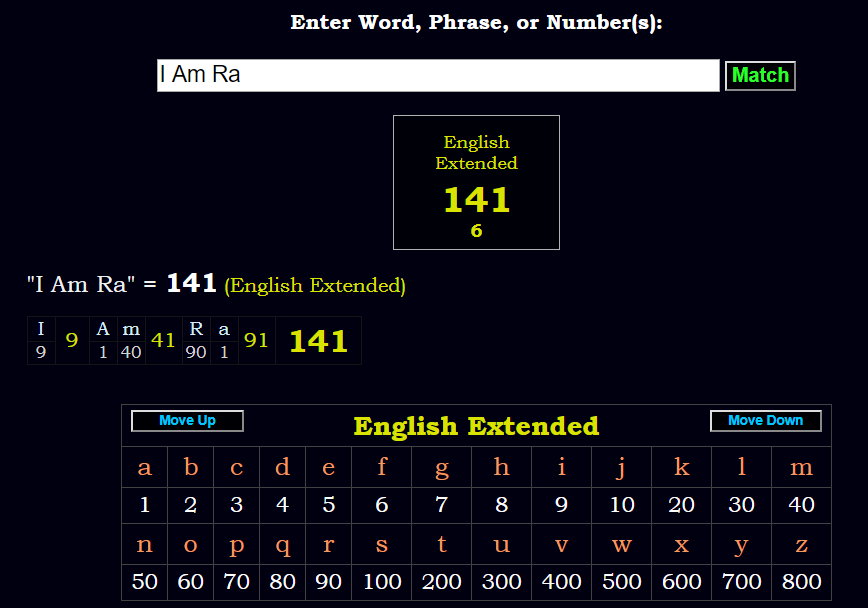 The number 71 appears in Pi as the 39th position. The next numbers are the sacred 3, 6 and 9 except in a different order:

The words ‘Seventy One’ also being up a couple of hits. Below we see the sacred geometric number 144 and the number 39 again:

It is also interesting to note that the gematria value of ‘The Blue Avians’ is 1111 (the Blue Avians have loosely confirmed that they are the beings called Ra):

I would also like to add that the Ra group claim they were the ones that built the pyramids in Egypt. It is interesting to note the pyramid-shaped house I saw in the dream which would be congruent with the theme/influence of ‘Ra’ in this string of numbers and gematria.

I was guided to enter in the phrase ‘Novus Ordo Seclorum’ (New Secular Order) which was derived from one of the ‘quote-unquote’ greatest oracles of all time during the time of the Roman Empire. David Wilcock included her predictions in a couple episodes of Wisdom Teachings on Gaia which I highly recommend (I don’t remember which episodes though, there are so many now.)

(The Earth Plan) “Charles AL Totten in 1882 wrote to Charles J Folger, Secretary to the Treasury, explaining that the phrase “nova ordo seclorum” (new world order) came from Virgil’s Eclogue, which were derived from the prophecies

In the above gematria calculator we see several hits in regards to this prophetic phrase. Upon entering 96 in the Pi position calculator we get that it is position number 180 which is a sacred geometric number and it is right after a 555 which can be seen as a synchronicity: This is everything I am being guided to share at this time. I believe the message here is clear, don’t be afraid, we are being watched over. Everything will be alright. Thanks for checking this out everyone and much love!