This post is going to feature some pretty wild information regarding some prophetic dreams which have come true. The dreams I have been getting over the past several years include seeing small personal events I would be doing the next day or so up to very large global events like seeing the outcome of the 2019 Eurovision Song Contest winners (by vote of the people) and even seeing Cabal members dying before they were reported to have been dead in the MSM. These are just barely a fraction of the countless examples which have been documented on this blog over the past several years.

These dreams sometimes contain messages for some people and I don’t include some of these in these posts as the messages mostly belong to those individuals. Many times the messages are of a personal nature and are to be kept that way. But I wanted to document this one because it went beyond just my own experience into other’s lives.

Some might recall that I was told in a dream that I needed to make an appointment with the doctor. This dream occurred probably January 3rd or 4th and it was basically of me in a wheelchair going to the pharmacy where I was given like 6 boxes of Vitamin B12 injections for free by a nice young man there. He was instructing me on how to use the injections and then I woke up. The message was very clear which was that I needed to get my B12 levels checked out and needed to go through the proper healthcare system process.

So that Monday January 6th I called and made an appointment with them and they had an opening the next day, January 7th, which I thought was fast. A tell-tale sign of being on the right path is everything going very smoothly and easily. At the doc’s office the NP (Nurse Practitioner) ordered an EKG on me in addition to some other labs besides the B12 levels. I told the staff there that the only reason I was there was because I had that dream which I told them about. The NP and I were also discussing things when the topic of what I do came up and I told her about orgonite. She was very curious about it and I told her I could make her some and she agreed.

I was able to get the EKG done at the hospital the same day and everything went perfectly well with no waiting time at all, another sign of being on the correct path. It appears the ‘higher ups’ had arranged all of this in advance. The next day I went back to town to get the labs done (had to fast before getting them done) which also went very smoothly.

The follow-up visit was yesterday, January 15th, and as it turns out my B12 level was surprisingly normal (nutritional yeast for the win!) but my Vitamin D levels were deficient (not enough sunlight) so she prescribed some to me.

But we were both amazed that the dream had actually indicated something being wrong in my body and it led me through a divinely-guided process to get that sorted out. And when I went to pick up the prescription at the pharmacy, it ended up being for free! Just like in the dream!

I was sure the insurance company would deny a prescription for a vitamin. And I was able to give the orgonite pieces the NP asked for to her and she was very happy with them.

The other dream message I had for someone recently was Teresa Yanaros who created Divine Frequency and has done interviews with Corey Goode and helped organize the incredible Dimensions of Disclosure gathering of 2018. She recently started putting out some more content and the dream I had seemed to answer one of her questions.

The title of the first of four videos in a series was ‘Does God Talk to us in Our Dreams?’ which was uploaded on January 10th: 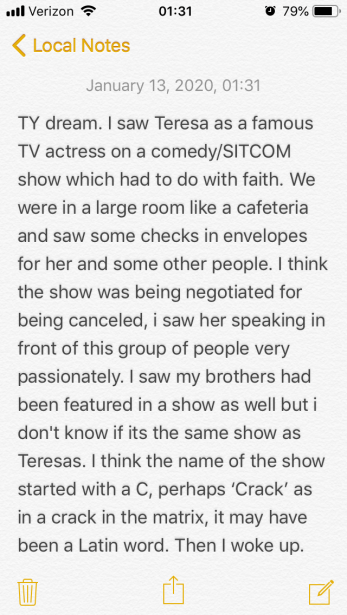 Then, later the same day, January 13th, she uploaded a sequel to the first video which was titled ‘Dream History: Soothsaying and Divination 2/4’:

I was blown away by this synchronicity and sent her an e-mail and she shared the same opinion about it.

The next few synchronicities are from a receipt which I got the day I returned to town for the follow-up visit the doctor’s:

I was getting dead ends until I multiplied the digits of the transaction together and got 252: 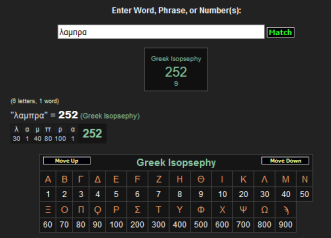 And finally the gematria value of today’s daily bible verse is 410: 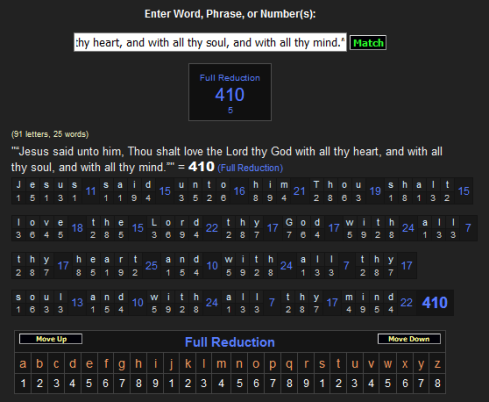 A couple of stories here, I believe the Cabal really didn’t like that we did those last two meditations (Silver Trigger  & Age of Aquarius). While I was literally in the middle of making one of the Silver Trigger promo videos I heard a honking outside and saw it was our neighbor who then informed me that our cat was attacked by their dogs and that he wasn’t sure if the cat would survive. I went around and looked for him and couldn’t find him anywhere so I assumed he had perhaps ran away to die somewhere or something else. But luckily he turned up later in the day. Sadly though he didn’t come home one day some weeks later which makes that the third cat to go missing (we live in the middle of no where with lots of wildlife including wolves, coyotes, mountain lions and so on) so we thought one of them got him.

Then during the making of the Age of Aquarius promo videos I had poured some orgonite in the shop and came back an hour or so later and realized I was stepping in a lot of water. An end cap on a PVC water pipe in the shop had ‘suddenly’ burst and was gushing water which filled half the shop with almost an inch or so of it. There was an electrical cord in the water which luckily wasn’t totally submerged so as to cause a potential electrical short or perhaps electrocute me. Taking care of that was a small nightmare and I missed the financial systems stabilization meditations because of it…

But we reached the critical mass anyways…

Gaia Portal posted a positive message which sort of went along with the content of the video I just made the day before: