So last night I discovered some incredible synchronicities related to a previous dream where I was shown some seemingly strange numbers in connection to an episode of Star Trek: Next Generation titled ‘Transfigurations‘.

I was guided to go back and re-watch this episode which is about a extraterrestrial man who is rescued by the Enterprise crew after escaping a tyrannical government who was brutally attempting to prevent his Ascension. His journey in this episode is comparable to that of the being we know of as Jesus.

In a previous article I found some other amazing synchronicities in regards to this episode which one can find here if they feel guided.

Another thing I noticed when watching this episode is that there are some parallels to the Essene community of which Jesus was a part of. According to the past-life regression client of the late Dolores Canon who was taken back into a past life as an Essene teacher who taught Jesus, they go onto share that this community was a mystery school. Dolores posited that their knowledge was passed down to them from the survivors of Atlantis and had regular contact with angelic beings/extraterrestrials.

In her book ‘Jesus and the Essenes’ she shares information about the colors of the clothing worn by people in this community and these colors corresponded to the person’s level of spiritual advancement.

Dolores: Then when they get through studying, they will go away again. Did they choose these colours for a reason?

S: The blue shows a lot of the inner peace. It is almost up to the level of the white. The white is the ultimate in attainment. You are at total rest and have achieved all that must be achieved. The blue is just one step below this, if this is to be understood…”

In this above excerpt we see that blue is reserved for the masters and then white which is for the elders and is the highest level of achievement possible in the community.

In this particular episode ‘John’, as he is called since he doesn’t recall his identity, is discovered in the crash wearing an all-blue uniform: 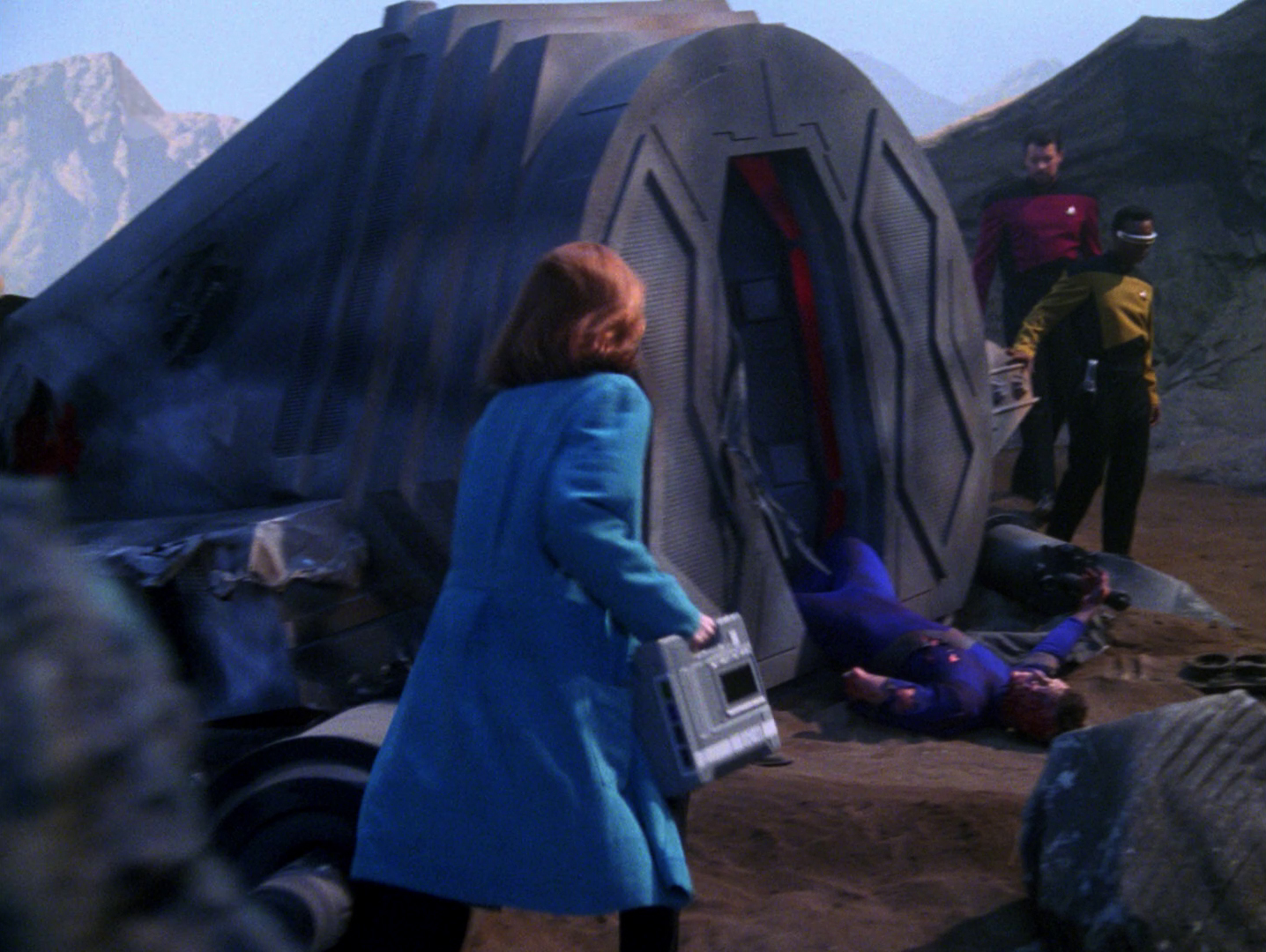 Later on in the show he remembers that he and three others fled his home planet in order to let the transformation process take its course. This kind of act can be referred to as a leap of faith and is one of the final steps towards achieving Ascension. This kind of action is also an act of coming face-to-face with fear which is another necessary step in this process.

During the healing and simultaneous transformation process of ‘John Doe’ we see him wearing a lighter blue uniform than the one he was found in. After this one he wears all-white, so the light blue could indicate a transitional time before the ultimate transformation.

Then he suddenly heals one of the injured crew members by placing his hand on the affected part of the body. It is not long after this that ‘John’ is wearing his new all-white outfit. It appears that he has graduated from ‘Master’ (blue uniform) to ‘Elder’ (white uniform):

And not long after this ‘John’ regains his memories and ultimately Ascends and transforms into a being of golden light:

If I am interpreting this information correctly, which is possible that I am not, then we are being shown some of the most important information about Ascension that we can learn, cleverly disguised as ‘entertainment’.

I would like to draw some parallels to my own personal experience with this journey. My own favorite color is blue and for concerts and recitals where I performed I was strongly guided to wear all-blue:

Me Bowing for Audience at Piano Recital 2018

And over the past several months I have been guided to wear all-white on certain days. And on these days I discover huge synchronicities which only reveal themselves later on throughout the day.

And another parallel is the amount of dreams I have been having recently where I am Ascending or turning into a being of light. In one dream I am basically told that this cannot happen yet because certain things and meetings with certain people have not occurred yet and that I needed to be patient (not easy for me) and continue my mission.

And now for the amazing synchronicities from this episode. Towards the end of the episode there is a confrontation between a ship from the government who tried to kill ‘John’ and the Enterprise.

The Enterprise enters into sector 9569 where ‘John’ originally fled from and this number contains the sacred number 659 but backwards which is a number that has been appearing in several dreams recently and is turning out to be a KEY number in these works. Amazingly our other sign post number 946 and 659 appear together in different order in the amount of page numbers for that site. These two numbers appear synchronistically to let me know I am on the right path:

And here is where it gets even more amazing. One of the divisors of the sector number 9569 is 1367:

Then I thought, I feel like I have seen this number before, and sure enough, this number appeared in a dream last month. I was so blown away I was crying:

Amazingly, the date I had this dream was 3/25 or March 25th, and this episode ‘Transfigurations’ is from season 3 episode 25 so here we see these two numbers matching up together to form another incredible synchronicity!

I will copy and paste what was written from that article on March 25th:

And 219 is the gematria value of ‘Second Coming of Christ’:

And ‘The War to End All Wars’:

I wish to share an incredible synchronistic story now which happened yesterday April 8th. As I mentioned before I am not usually guided to write about my encounters with the homeless but this is another exception. I am doing this as much as I can with the money I get every month from Patreon and another kind person.

I had gone to town to get some groceries and as I was driving into town (we live in the middle of no where and town is about 30 minutes away) and I noticed the sign for a near-by thrift store and I suddenly got the emotion/impression to go there. So I turned the car around and went to the store.

I walked around for a minute not having any idea what I was suppose to do there which is usually the case when ‘they’ (higher forces) suggest/guide me to go somewhere. Then suddenly I got the emotion of ‘SLEEPING BAG’, as in I needed to buy the sleeping bag. I knew it would be for someone but I just didn’t know when or to whom it would be gifted. I have held on to things/supplies/orgonite for weeks before which ended up going to the exact right person at the exact right time so I wasn’t totally sure what was going to happen.

I decided to drive towards the recycling center up there to drop off my recyclables and there was a homeless man holding up a sign who I had helped before. But I didn’t get the strong emotion I am used to which confirms to me that I should act and help that person.

Instead I yielded to this ‘lack of communication’ and continued to go drop off these recyclables and amazingly when I got there I saw a man holding a sign asking for $20 in exchange for helping others unload their stuff. I knew immediately that these things I bought were probably for him. It was unusual to see a person there with a sign like that because this area is a few miles from town and doesn’t have many stores near-by.

He let out a small laugh as if he was amazed and then I went on my way. I didn’t know it at the time but we are due to be getting some rain here tomorrow so I believe this is why I was guided to buy him a poncho. This adds even more awe to this benevolent force which looks out for people.

Yesterday, April 8th, I checked the bible verse of the day on a website I use which has provided some incredible synchronistic information so far and the verse number just happened to be 314 (appearance of Pi = God/Source) and was about Jesus:

And the gematria value of this verse is 288:

And we know if we plug 288 into Pi we see it takes position 33 which is how many years Jesus allegedly lived:

And amazingly, when I plugged in the name of the character from that Star Trek episode ‘John Doe’ into the gematria calculator I got a value of 24:

And we know if we plug in the number 33 into Pi we see it takes position 24:

This appears to be another confirmation to the comparison of that character to being Jesus, except being more accurately portrayed in that episode than in the bible, in my own opinion.

But the fun isn’t over yet. This particular post number is 29601:

Another reminder here that I don’t choose these posts numbers. They are chosen by WordPress when I open a new blog post.

Additionally, last night I was also overcome by this same emotion which suggests where I go, what to buy, what not to eat, what to write and what to research. This emotion/force has provided me with another uplifting poem to share with all of you who feel guided to read this post. I believe this same force was giving my great-great-grandmother inspiration/ideas for her poetry which she actually wrote a poem about:

“Sometimes an angel
Murmurs in my ear,
Words strangely sweet,

Faint sounds I scarce can hear.
Quickly I write,

That some may share with me
Those whispered words:

You call it poetry.”

Here is the poem/transmission that was done through me. This force instructed me on what to keep, what to erase, what to change and how it should flow. What is interesting is that not all of the lines in this poem rhyme, and some of them do. This occurs in my g/g/grandmother’s poetry as well. There is also a nice down-to-Earth sense of humor which comes through which is fun. I also want to say that I don’t write like this so I hope people can get on-board with the idea that this is an external force communicating these things:

The time is close we’re almost there,
The eleventh hour is where we are.

Prepare yourselves for such a blast,
A dance, a dance to leave all in the past!

A new world to celebrate again and again,
The time of our lives to infinity and beyond!

Let’s share this moment in brilliant glee,
And open our hearts to ye and thee!

Our pace outshines the dreadful past,
As we leave the demons behind distant glass.

Share with me a burst of joy as we begin
The new age with love forever more!

Glory, glory to the Infinite One,
Who showers each being with endless love!

We pardon and excuse without any effort
As conflict and drama are far far behind us!

We live, we love without even trying
And people rejoice because there is no lying!

Oh pain, what pain? This word shan’t be used,
It’s left in the old world, it won’t be remembered.

Take heed of these words they’re as true as can be,
For what waits each of you is beyond what you think!

Who am I? I am you, but I see what will happen,
Since now is the time, it’s time to get crackin’!

My friends, dear friends it’s almost that hour,
Where hatred is gone and it has no more power!

Time’s speeding up, it goes faster and faster,
Get ready for heaven to replace this disaster!