So this particular post won’t be as number-dense as most of the other ones are (woohoo for the readers and my brain!).

I have been guided to watch all of the Men in Black movies once again and have found a couple of amazing things in the third installment of this franchise.

In one scene while one of the agents is chasing down the antagonist (Boris the Animal) there is a banner which reads ‘wolf boy’ in the background at the carnival where they are located:

The wolf is my spirit animal and it appears in both the waking and dream state to guide me and has done so reliably for several years now.

During another scene while the agents are in a baseball arena along side a fifth-dimensional being named ‘Griffith’, who can perceive all past, present and future possibilities/probabilities simultaneously, talks the agents through a series of events which lead up to the team they are watching winning the game against all odds.

At one point they pan to one scene where the magic number 410 appears:

And right after that Griffith puts it so beautifully: “A miracle is what seems impossible but happens anyway.”

This is significant because the number 410 appears several times throughout history, especially major historical events:

“…The sacking of 410 is seen as a major landmark in the fall of the Western Roman Empire. St. Jerome, living in Bethlehem at the time, wrote; “the city which had taken the whole world was itself taken.”

“On April 10 [4/10], 1912 the RMS Titanic set sail on its maiden voyage. The ship departed Southampton, England, bound for New York City, New York, with Captain Edward J. Smith in command and 2,223 people aboard…”

It appears in the measurements of the very layers of this planet:

The first layer or Upper Mantle of the Earth is 410 KM deep and the Transition Zone is 660 KM deep which equals to 410 miles.

It appears in the measurements of world monuments:

410 and Pi (314) are some of the most important numbers that are manifesting at this time:

These are but a FEW of countless examples documented throughout The Jesus Synchronicities. 410 is THE keystone, the capstone which completes the whole picture. It is THE missing number which has somehow not become more known in our history.

A great example, 410 divided by the sacred 369, which Tesla spoke highly of, is 1.11111 and this literally goes on FOREVER. The Infinite ONE, which is what the Universe is, ONE living organism which splits off into Infinite parts, experiencing itself in every conceivable possibility imaginable and using this knowledge to create more of itself:

As was already documented, 410 is the address of the insurance company which I am insured with by the state of Arizona as of the time of this writing:

It sounds crazy, but it appears that what is happening with all of this was depicted in the reboot of the British sci-fi series titled ‘Doctor Who’ where an extraterrestrial being simply called ‘The Doctor’ travels throughout space and time in his TARDIS (Time And Relative Dimension In Space) with his female sidekick.

His first sidekick, Rose, notices the word ‘Bad Wolf’ appearing here and there in almost every episode. In the last episode she is the only one who can save The Doctor and the planet by opening the heart of the TARDIS which is a powerful living being and looking into it. 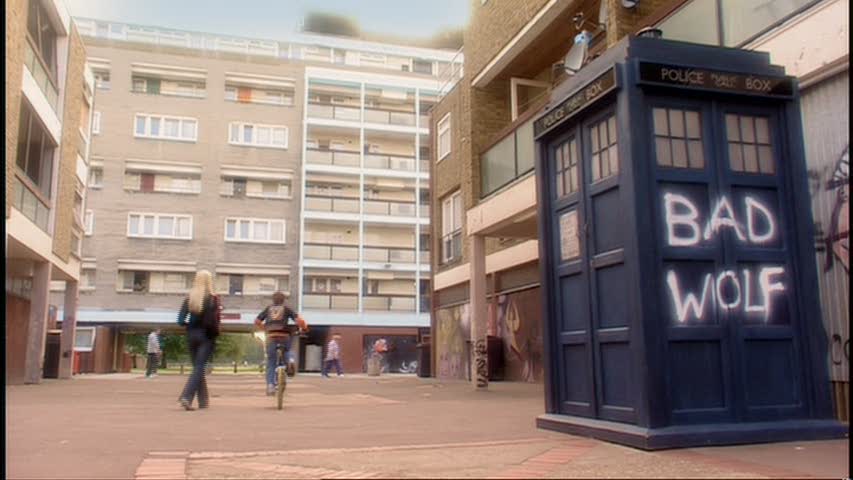 When she does this she is endowed with the ability to change time, space and matter at her will and scatters the name ‘Bad Wolf’ everywhere to lead her to where she is supposed to go.

Script from last episode of the reboot of Doctor Who

As strange as it sounds, this seems to be exactly what is happening with the appearance of my spirit animal the Wolf and the number 410. Anywhere the Wolf appears, in any form, that is a sign the correct path is being taken, including in dreams. People who have been following this blog for a while know this is exactly what is being documented here. Countless instances of the wolf appearing in many forms. 410 has been appearing throughout time and space.

Some might recall that I was told that I would be going through a quest of many perils and that some brave wolves would guide me on this journey:

Had a dream where I was to go on a quest of many perils. I would be aided by these wolf/dog beings who would go ahead and clear the path for me so I could continue and complete the journey. It was like a video game. They paved steps for me and fought monsters and evil beings for me so I could traverse the path they led for me.

It appears that somehow, reality is being changed to make this possible. I had a dream which hinted at this. Where I possibly changed reality so I could get pictures of the synchronicities the next day and ultimately share them on this blog:

I saw my blog subscriber count drop by a chunk after doing this.

I saw 659 first as a gematria screenshot which was lined up outside on the ground I think and then added like 729 and 720 I think. I was moving physical objects into  vertical alignment to make these work. I am a bit confused by this dream.

Can you imagine something so amazing like this actually happening? As the person experiencing it first hand, it is truly surreal. Personally I don’t believe there is any other explanation, other than reality is being manually and benevolently changed, in order for these synchronicities to be possible. But of course everyone is free to decide for themselves what to believe.

The next couple of dreams manifested this morning and one of them I really didn’t like at all and the other one was really amazing. Here is the amazing one:

Perhaps the last part of this dream is the immediate prophetic portion in that the information contained within this particular synchronicity report will encourage people reading this to take these reports more seriously.

What is interesting about the above dream is that this will be the 3rd day in a row that the number 555 has appeared in a dream. So far this has never happened before. According to the Angel’s Numbers website this number indicates huge personal changes. As was already mentioned I have zero interest in any kind of romantic relationship so I really don’t see myself putting any effort into this Twin Flame thing. Especially since Archon/Parasites won’t allow them to incarnate at the same time. But then again the message manifested during a party which might mean it will be a positive experience…Probably not going to put much energy into that though regardless.

So according to Strong’s Concordance, which is an indexing and translation of every word in the King James version of the bible, the word which is assigned the number 555 in Greek is ‘apekdusis’ which translates to ‘a stripping off/casting off’. The Hebrew word which is assigned the number 555 is ‘omets‘ which means ‘strength’. Time will tell of course what this number has indicated. Hindsight is 20/20. It would be great if it meant that I can finally (re)Ascend. I have been told in a handful of dreams that this is going to be happening, but that it is not time yet. In another I was an Ascended being trying to convince a Nazi to join me:

If we plug this into Pi backwards we see it takes position 721:

297 is the gematria value of ‘The Jesus Synchronities’ which is what I have been guided to call this huge collection of reports:

I have broken the juice fast yesterday on August 10th at 1600 hours. This was simply because I ran out of money to buy more things to juice, but this appears to have been synchronistic because I finished cooking my meal to break the fast at 3:59 PM (15:59) and if we plug 1600 into Pi it takes position 22222:

It was an intense emotional cleanse which inevitably manifests when body fat is used for energy and the toxins (emotions) pent up in the fat come up to be released. Some profound personal revelations manifested during this time. It is interesting (synchronistic somehow?) that this fast was broken the day before the 20th anniversary of the turning point of the Ascension window for Earth which is today:

This is everything for now, much love all. Definitely ready for this: